An Updated Map of the Realm

Fans of the Dhea Loral realm, it’s time for a confession: the original complete map of Dhea Loral was lost decades ago!

Players have been gaming in Dhea Loral since the end of the 1980s. Unfortunately, the original map went missing. Since then, I’ve made smaller maps dedicated to whatever regions the players adventured in. Also, I made smaller maps to go with my books, based on that particular book’s setting.

The rest of it has lingered in my head all this time, or on paper notes. For the longest time I didn’t mind much of the realm being an unknown. After all, the Godswars reshuffled land masses! Even though ships venture out and trade, they also explore. Very few navigators have even traveled half the ports in the world. if players wanted to discover, they had to go out and find sites themselves.

Take the continent Eyldiian, for example. It is a heavily forested continent, jealously guarded by the elves. Humans call it “Wilder”, due to it’s wild and unexplored nature. Every player map up to this point has revealed only a coastal outline with the word “UNEXPLORED” stamped over it. The same was true of the orc lands west of Tariyka and Mai-Chong, at a location called Grenk. All unexplored. A few of these landmasses have been hinted at but never visited.

Even in Dhea Loral, the world is unexplored enough that successful ship captains don’t share where they’ve gotten the goods they trade. A veteran navigator could be worth their weight in gold.

This secrecy had to end at some point. At a convention last year, I saw an author who hung his world map as a backdrop at his booth. It was glorious to behold! My fellow indieauthor Ozgur Sahin routinely owns the most alluring table set-up. He has a cloth map of the Caribbean, and realistic toy ships inhabit it. People often walk over to see if he’s selling a game! At a convention recently, someone who perused my books, (and didn’t realize I was the author), commented that the book maps looked 8-bit! Well, they probably were.

This led me to the idea of breathing life back into an updated, realm-wide map of Dhea Loral. Fans will also notice I’ve already updated the “map” page of my site with the new map. To see the whole thing, you may need to “open link to a new window”.

The full-size version spans around 4 feet by 3 feet. I also made one with half dimensions as a table place mat. You’ll be seeing this at conventions! Enjoy…you’ll be making the players of Dhea Loral jealous. 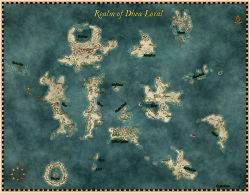