Click on a specific book in the menu to learn more, as well as see links to purchase it.

A young maiden discovers that rumors of a witch in the vale are true, and becomes trapped by a curse.

After her husband is ambushed and killed, the dwarf Duli must rebel against a patriarchal society for the right to join the war against the humans.

A young, talented mage is given her first big assignment, but it becomes far more dangerous than her master realizes.

After an attack on their village, two young boys recruit a misfit band of adventurers to rescue a noble girl. Will they discover the real crime set into motion that night?

Thomena travels back to a home she barely remembers, and a father that wasn’t around to raise her. She discovers a land in which the monsters outnumber honest folk.

Trestan embarks on his first quest as a squire-paladin of Abriana. It begins in the ruins of his home, and the key is hidden in his lover’s past.

Ambitious gods have set their pieces into motion. Now, mortal pawns race to a final confrontation at a fortress on the edge of civilized lands.

A dysfunctional group of strangers, who prefer to keep their secret pasts hidden, must band together to survive in enemy territory.

Allisee, a sorceress with a hidden agenda, convinces the others to help her obtain treasure from a castle. However, it stands in lands that the unliving patrol.

Steampunk versus Wild West action as an unwilling con-man boards a biplane to stop a mad scientist’s train.

I’ve added Amazon links for the convenience of most readers, but these local bookstores between Minneapolis, MN, and Hudson, WI, have stocked my signed books on their shelves and can also use your support. (Any book store can order my books if it isn’t in-stock.) Support local when you can. 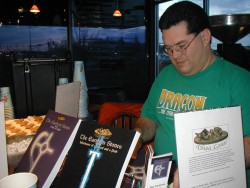