“The world was torn in many ways. Great cities were lost, empires broken, small villages clung to whatever scraps they could foster out of the wounded ground. The balance of things natural had been tipped to the point of making some species extinct. The world was nowhere near the jewel of prosperity it had once been. The gods had been so consumed in petty disputes that they had forgotten their role as caretakers.” — Lore of Dhea Loral as told in the preface of “Inheritance of a Sword and a Path” 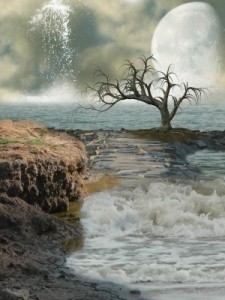 Thus begins a description of the fantasy world of Dhea Loral, referring to the time just after the ancient Godswars ravaged the land. The land was once rich in magic and trade, but at the height of its glory it was slowly betrayed by the gods whom had helped shape it. It started with powerful immortals and gods of lesser power attempting to carve out more than their fair share of the riches. By the time it had ended, the major gods had taken part and brought to ruin most of civilization. The Godswars ended with the signing of the Covenant; an agreement which forced the heavenly powers to take no more direct hand in the shaping of mortal lives.

When the realm of Dhea Loral was used for a home role-playing campaign, it was set many centuries after the races had begun to rebuild from the ashes. Since it would be a very boring world if the gods had a direct hand in things, the Covenant resulting from the Godwars keeps them at bay. They are free to use mortal servants and worshippers to carry out their plans; henceforth, now that the recovery has been well underway, those mortal agents are now involved in a quieter, almost secret war to carry forth the interests of the gods. This was the birth of modern day priests and clerics in the realm. These mortals carry out the wishes of the gods. In this way as well, mortals still ultimately decide the fate of the realm.

That doesn’t mean that the realm is completely safe from the gods. In The Earthrin Stones series, enough time has passed that some gods are intentionally testing the limits of this relatively new “Covenant”. There is still the fear if the agreement fails then the world will suffer under a more catastrophic Godswars. 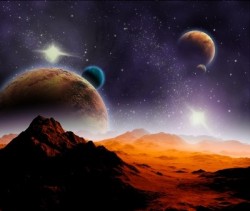 Dhea Loral is set in an area of the world that shows the physical scars of the Godwars. There are no great continents as yet discovered. The realm is divided into numerous smaller continents and island chains surrounded by many waterways. Ruins can be found throughout the lands as evidence of the golden age before the Godswars. Even the most current maps of exploration leave large gaps where little is known. The coasts have been well-traveled between some of the larger ports of commerce, but the interiors of land masses have been mostly hidden behind jungles and mountain ranges. Many people who seek adventure do so for no greater reason than exploration. These explorers would love nothing more than to recover lost riches and rediscover forgotten magic.

As a part of the Epos Goth planetary setting, there are a few constants. The calendar is a 400-day year. Specific to Dhea Loral though, it is divided into 10 months, each one 40 days long. Weeks are ten days long. The new year anniversary, or more appropriately New Season Day, is held on the 1st of Primus and commemorates the signing of the Covenant.

There are three moons orbiting the night sky. In order from largest to smallest, they are Aburis, Nirahha, and Liijay.