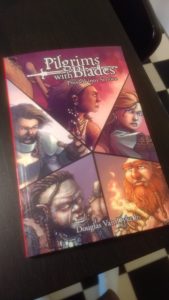 The first copies of Pilgrims with Blades: A01 Pressed into Service have arrived!

For those who have anxiously been waiting for that next read, I have it! The debut novel in the Pilgrims with Blades series, Pressed into Service, is now available! (I beat my October deadline!) Notice its home page has been moved to the published section.

For those of you who live near me in the Twin Cities, Minnesota area, I am working with some local businesses to do some author appearances and signings. More to be announced soon as that develops. Also, if you happen to live around Mobile, Alabama, I will have these books on hand for Quest-Con Oct 20-22nd. There are also appearances planned for other local Minnesota conventions next year, which I will announce soon.

If you don’t live nearby, you can order printed copies through Amazon or digital ones through Kindle. As I’ve done with previous books, buying a physical copy automatically gets you a digital Kindle version as well.

For this series, I’m focusing on short stories based on the adventures of a team of adventurers who each harbor a mysterious life-quest. I was partly inspired by the Conan serial of adventures written by Robert E. Howard. The setting remains in the epic fantasy world of Dhea Loral. You never know what other characters from other books may make an appearance! (In fact, one of the Earthrin Stone trilogy characters has her name mentioned on page 30!)

I eagerly look forward to the first good review! 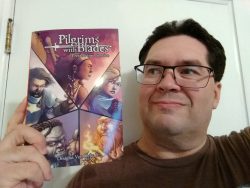 First copy of Pilgrims with Blades in hand.