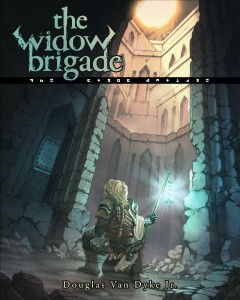 For those asking about audiobooks, the first one is ready! The Widow Brigade is narrated by Darla Middlebrook. It was a great feeling to hear Darla give my characters a voice for the first time! (I linked her site at the bottom.) I know this will please a lot of folks at conventions who’ve asked me for audio versions. Feel free to check out the links below to claim your own copy!

If you didn’t know about The Widow Brigade, all 11 Amazon reviews have been a perfect 5 stars! Goodreads is at 4.5 after 10 reviews.

“If your death ever comes before mine, I hope the gods take my life soon after.” Duli and her husband had stated those words to each other several times. Then the day came when his dwarf kin brought his body back from the field of an ambush. As a non-clan dwarf, rendered beardless by old customs, her widowed status places her in the lowest caste of Tok-Maurron. Fearful of her future under a chauvinistic crafters’ guild, and unwilling to complete her suicide attempt, Duli’s emotions turn to rage directed at the humans. Dwarf traditions forbid women to wage war, yet the ongoing battles leave more widows enticed by her call to action.

Ridiculed, chastised, and even jailed in her own chambers for her actions, Duli’s struggles for her beliefs are even slowed by her need to earn a living off her non-sanctioned craft. Duli only wishes her own death, but in the process sparks a liberation movement that shakes the subterranean city to its core values. Even if the women win over their clan, they must still prove they have the mettle to face their husbands’ killers, and the magic that humans command.”

The Widow Brigade features strong women, in a fantasy setting, rebelling against the traditions of a male-dominated society. The following quote by Laurel Thatcher Ulrich influenced how this story had to be written: “Well-behaved women seldom make history.”

New to Audible? If you are a first time visitor to Audible, I have a different set of links for you to follow. I get a special bounty if you sign up for Audible through my book:

There is also an audiobook still in the works for “Boxer Earns His Wings.” I’ll update on that one when I can.